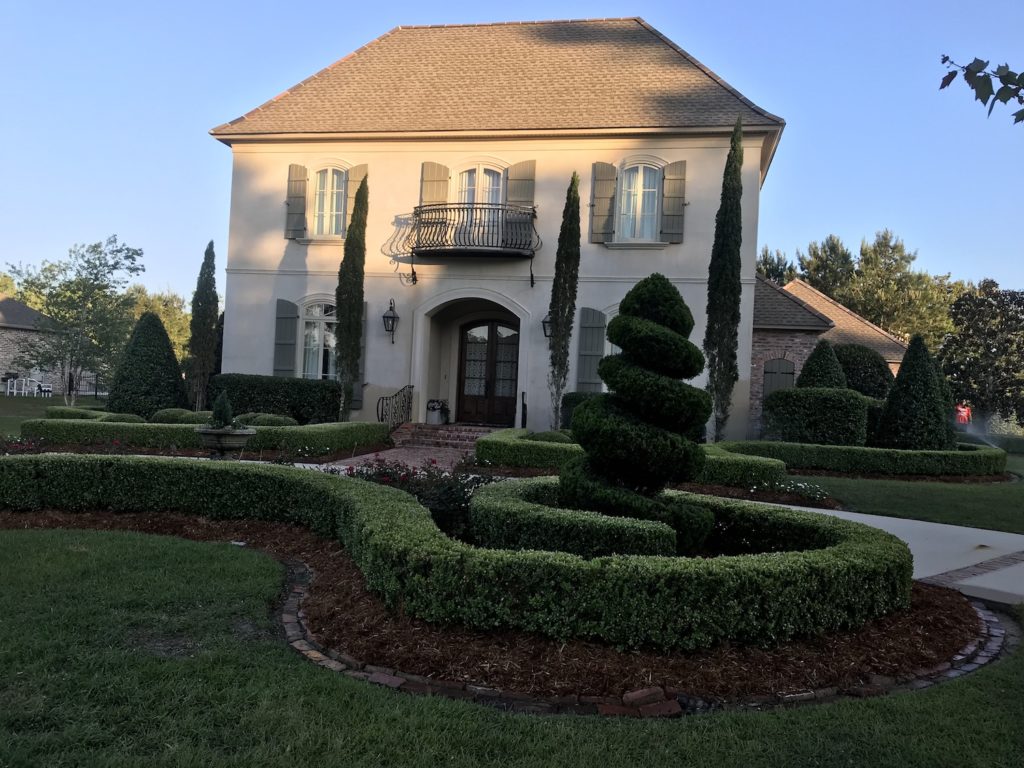 Spring Is In The Air

With spring right around the corner we get a lot of questions about the right time, and methods of pruning ornamentals in the southern landscape. Pruning can be very complex due to each plant in the landscape require certain pruning at a certain time of the year to maintain its growth habits, and flourish with color during the blooming season. In the south we take pride in our landscapes appearance so we have to remember that pruning is not only for the artistic appearance, but more importantly its the guide to a healthy growth habit.

Why Should You Prune

When pruning your landscape you want to make focus on what needs maintenance and what don’t. Walk around the landscape and look for dead branches that can be pruned back to eliminate the spreading of disease or any chance of the plant becoming a host for insects. The next key thing to look for is that the growth habit of the plant suitable for its location. We always want the plant to maintain it geometric shape, but we don’t want it growing into other plants, into the soffit and fascia, or against our home. If you have plants that have overgrown their location like azaleas, and camellias they can be trimmed within 2′ of the ground. This is called rejuvenation pruning and it is not recommended on evergreens since they recover slower.

How To Properly Prune

This question is one of the biggest flaws seen in the landscapes that we start maintaining. We have to understand that pruning your shrubs or trees in a landscape determines the height and width of our plants. At the end of each branch or twig we have whats called a terminal bud. The terminal bud produces auxin which directs the growth of the buds along the stem. When pruning azaleas, roses, and hollies in a landscape that have alternate stems we know that the bud below the cut will become the dominant new growth. This means when pruning we can tell by the direction of how the next bud is oriented is going to be determine the future growth habit of the plant. For example if the bud immediately below the last cut is facing outward, we know that the new growth is going to grow up and out. This is extremely important because most of the new growth following a pruning cut is going to happen six inches of the cut and this will help us determine future growth habits.

When Should you prune

Most ornamentals plants can be pruned at almost anytime of the year. If major pruning is required you should try and wait till the winter so your plants are less likely to disease and you can visually see branches that need trimming. Prune at times that best complement the growth habit, flowering time, and location in the landscape. Many woody ornamentals are pruned according to their date of flowering. For example, spring-flowering plants, such as azaleas and dogwood, normally are pruned after they bloom. Avoid heavy pruning during the late summer and fall because new tender regrowth will be forced by the pruning, and the plant can be easily damaged by freezes and frost. Ornamentals that produce fruit or flowers should be trimmed according to blooming season. In the south plants that produce flowers before May should be pruned after they bloom, before they set their buds for the next season. Plants that flower after may should be pruned during the dormant season before new growth begins.

If you want to find out more please contact us and we can answer any questions you have. Ground Control also offers yearly pruning and flowerbed maintenance.